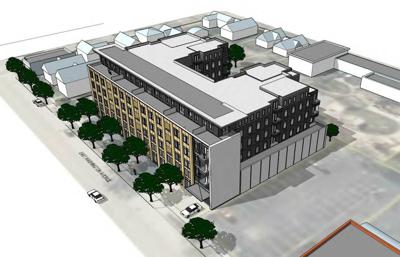 The Madison City Council approved Tuesday investing $6.8 million in city and federal funds to help four developments that include low-cost housing, including Gorman & Co.'s proposed Valor on Washington project on the 1300 block of East Washington Avenue. It is slated to provide 50 low-cost units for veterans and their families.

The Madison City Council on Tuesday backed investing $6.8 million in four housing projects that are expected to provide 310 lower-cost units.

The projects, which are spread throughout the city, are estimated to cost a total of $84.6 million. The money comes from $1.98 million in federal Home Investment Partnership Program funds and $4.82 million from the city’s Affordable Housing Fund.

Developments approved to receive funding are:

In other action, council members unanimously rejected a proposed moratorium on certain new liquor licenses in a broad swath of Downtown, which Soglin offered as a way to address alcohol-related problems.

After initially proposing nearly a year ago a ban on all alcohol-selling licenses, except for those associated with new hotels, Soglin scaled back the area that would be affected, built in some exemptions for restaurants and proposed a task force to study the over-consumption of alcohol Downtown. But his revised moratorium gained little traction in the committee process.

Instead, the council backed a separate proposal that will direct the city’s finance director and other city staff to analyze alcohol density throughout the city, in order to provide recommendations on alcohol policy changes. The proposal will also look at any connection between excessive drinking and a disproportionate use of emergency services.

Soglin said he hopes the analysis will provide successful ideas, adding that he continues to be concerned with the health of retail stores Downtown that compete with restaurants and other service businesses.

Additionally, the council approved the city to file a lawsuit against the village of McFarland and property owners over a disputed land annexation near Interstate 39-90 and Siggelkow Road.

The McFarland Village Board approved last month the annexation of about 148 acres of land, addressed at 3341 and 3372 Storck Road, from the town of Blooming Grove to the village.

But the city argues the annexation is not valid as a 2006 agreement between Madison and Blooming Grove calls for the properties to eventually become part of Madison as the town is dissolved. McFarland officials say, though, that since the village is not a party to the agreement, it is allowed to annex the land.

At the end of the City Council’s last meeting of 2018, Mayor Paul Soglin asked for an impromptu “moment of silence in honor of democracy” as state lawmakers deliberated during an extraordinary session Tuesday GOP-backed bills that would limit the powers of the incoming Democratic governor and attorney general and curtail early voting, among other changes.

“Democracy is very much alive here in the council chambers of Madison, Wisconsin, unlike the chambers two blocks to the west of us where democracy has been under threat for several years now,” Soglin said, referencing the state Capitol.