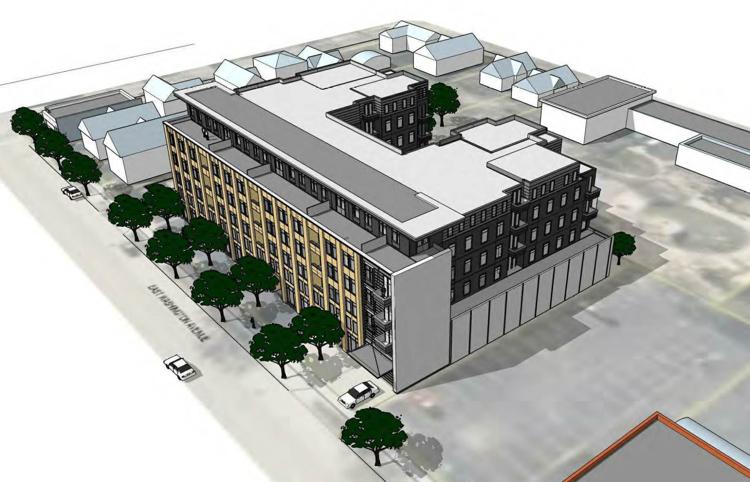 Madison is considering a $950,000 investment in Gorman & Co.'s proposed Valor on Washington affordable housing project on the 1300 block of East Washington Avenue, one of four low-cost housing projects that could receive a combined $7.1 million in city support. The city investments can help secure critical federal tax credits for the projects.

Seeking to address a chronic affordable housing challenge, Madison will consider investing an additional $7.1 million in four more projects with a combined 310 lower-cost units costing a total of some $84.6 million.

The projects, which can still be revised, are:

•Bayview Foundation and Horizon Development Group’s $29.3 million mixed-use project at the southwest corner of West Washington Avenue and Regent Street, an area known as “The Triangle.” It includes 130 units of multifamily housing with 120 of the units for those making less than 60 percent of Dane County’s median income, or $49,560 for a family of three, and a new community center. The project would replace Bayview’s 102 existing, obsolete townhouses constructed in 1971. The project would get a total $2.9 million in city investments, including $1.9 million from the Affordable Housing Fund and $990,000 from HOME.

•Gorman & Co.’s $14.8 million Valor on Washington on county-owned property at 1314, 1318, 1326 E. Washington Ave. It includes first-floor space for nonprofit Dryhootch that supports veterans, and 59 apartments for veteran families, with 50 of the units for those making less than 60 percent of the county’s median income. The project would get $950,000 in Affordable Housing Funds.

•Movin’ Out/Mirus Partners’s $20 million Ace Apartments, 4602 Cottage Grove Road. It includes 70 apartments with 59 of the units units restricted to those making less than 60 percent of the county’s median income, and 4,000 square feet of commercial space. The project would get $110,000 from the Affordable Housing Fund and $1.3 million from HOME.

•Stone House Development’s $20.6 million Schroeder Road Apartments, 5614 Schroeder Road. It includes 96 apartments with 81 of the units for those making less than 60 percent of the county’s median income. Ten of those are for formerly homeless families and 10 for veterans, with 4,000 square feet of space likely for a restaurant, perhaps to replace Babe’s Bar and Grill, which would be demolished for the redevelopment. The project would get up to $1.85 million from the Affordable Housing Fund.

The developers had responded to a city request for proposals for projects that would use city investments to help create lower-cost housing, part of the city’s Affordable Housing Initiative begun in 2015 to add at least 200 lower-cost units annually. Developers withdrew applications for two other projects before the city’s 2018 review was completed.

The resolution will be considered by committees, with a council decision at a later date.

The local investments are intended to help the developers secure critical federal Low-Income Housing Tax Credits — seen as make or break for the projects — that are administered by the Wisconsin Housing and Economic Development Authority.

The city investments are contingent on the developers receiving local land-use approvals and receipt of the tax credits, which are announced in the spring, city community development director Jim O’keefe said.

So far, the city has invested $18.6 million to help secure about $108 million in WHEDA funding on 14 projects costing a combined $185 million. The projects will create a combined 948 apartments with 839 for those making no more than 60 percent of the county’s median income, and including 180 units with support services for the homeless.

“I think the strategy to use city funds to leverage federal tax credits has proven to be a wise one,” O’Keefe said. “It’s a way to make limited city dollars go a lot further.”

The city, however, is not financially supporting a new submission for more permanent housing with support services for the homeless this year because its initial two projects on the East and Far West sides have generated police calls and neighborhood concerns, O’Keefe said. A third such project slated for 1202 S. Park St. is now moving through the land-use approval process.

The city intends to explore more reliable financing streams for the support services and hopes to support another housing project for the homeless in next year’s city funding cycle, he said.