Residents from the area surrounding a potential multifamily residential development showed no clear opposition to the project during a neighborhood meeting Tuesday.

About 30 people braved bone-chilling weather to attend the meeting at Sneakers Sports Bar and Grill, where the guest list was limited to residents near the vacant baseball fields on Woodman Road just west of the intersection of Mount Zion and Milton avenues. Those in attendance displayed no obvious NIMBYism that can sometimes plague such proposals.

The plan, still in its preliminary stage, would transform the vacant ball diamonds into six buildings and 119 units of two-story townhomes on 9.9 acres. It’s a relatively low-density project and would fit the neighborhood of single-family homes, said Scott Kwiecinski of Horizon Development Group.

He estimated it would cost about $17 million. He plans on submitting a tax increment financing request to the city.

The market-rate apartments would have one-, two- and three-bedroom units ranging from about $850 to more than $1,200 in monthly rent. It would include ample parking through surface spots and multiple garages, he said.

Tenants would have to pass a variety of background checks and minimum income levels to ensure residents would be financially reliable, Kwiecinski said.

The neighborhood meeting was a good-faith effort to inform residents before the project reaches public hearing stages at the plan commission and city council, he said. Those in attendance seemed to appreciate that, even if it was hard to hear at times over the din of a sports bar.

Resident Tony Bastien sipped a beer after the meeting and called the gathering “informative,” even if he leans against the project. It had a decent living plan, but he worried it could fall into disrepair after construction if mismanaged, he said.

He would rather the space get turned into a park or picnic area. Whatever the developers decide to do, Bastien hoped they would consider the neighbors, he said.

Mary Bancroft worried a little about more traffic in the area. But she thought a rendering of a similar project done elsewhere looked nice, and she said she remained open-minded to the idea.

Mayfair Road might eventually be extended through the property to improve traffic flow, Kwiecinski said.

Without more places to live, Janesville would deal with an “economic development and workforce retention issue,” he said.

The development team will review feedback from Tuesday’s meeting and decide whether they want to alter their plans. Public input was “constructive” and “neighborhood-oriented” and showed residents have a lot of pride in their community, Kwiecinski said.

He expects to submit a rezoning request later this spring to change the land from conservancy to residential.

If the plan stays on schedule and earns approval, construction on the first building could begin in late summer of this year. The first units would become available in 2020, he said.

The rest of the buildings would be constructed in stages. 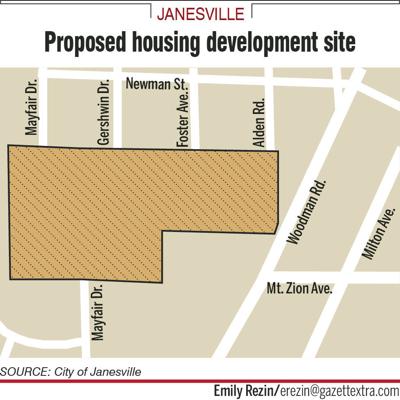